For the past week, G has been on a crafting extravaganza. We have made and baked and crafted and created. He loves that the holidays are upon us and we can FINALLY decorate the house for something! One of the first projects we did was a felt skull banner.

I cut one piece of the orange felt into quarters (fold in half, cut. fold both halves in half, cut).
Did the same for the brown. This makes 4 orange rectangles and 4 brown. 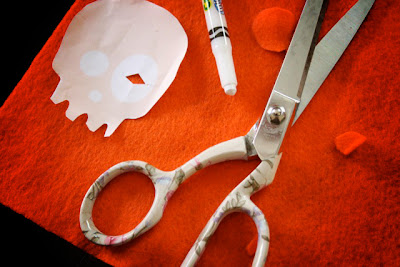 We had looked online for a skull I could cut out with scissors easily (and which G approved of), and found this one. I cut it out after printing a copy to the printer (printed larger/blown up to fit my felt rectangles). I used a chalk pattern pencil to outline it to the felt. I cut out 4 orange skulls and 4 brown skulls from the other 2 felt sheets. 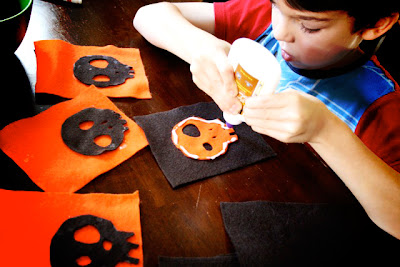 G got to work laying out all of the felt pieces and gluing orange skulls to brown felt, and brown skulls to orange felt. 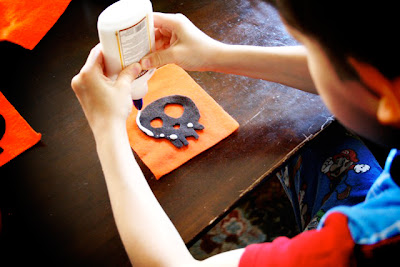 Once that was done, it was time to attach the felt bunting/banners to the bias tape (you could easily use a ribbon or hem tape too). I offered to sew it for an even stitch, but as he must do everything himself and already had to concede that I must do the skull cutting, he decided that stapling would be best. He carefully stapled each felt piece to the bias tape. 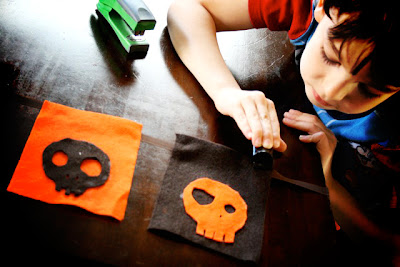 He then applied a glitter glue design to cover the staples. 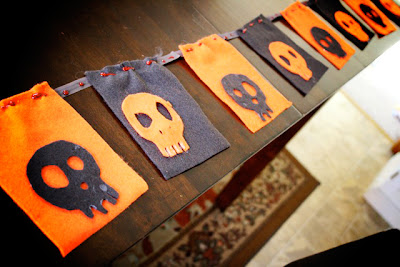 After it dried for awhile it was ready to hang. We now have an awesome skull bunting/banner hanging in our window. He wants to make more! I have my scissors ready. 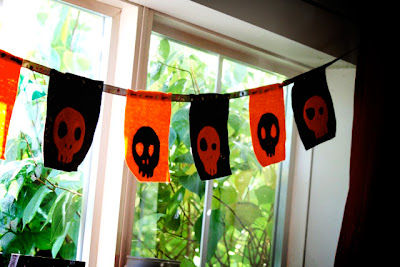 My son will love this. He has been sewing and making all sorts of decorations for the house for Halloween but he's run out of ideas. This one will surely get him going again!

hello from Canada
very cool !
my kids want to make one with ghost !
thank for the ideas and the great pics !

The banner is wonderful and I really like the brown/orange combination. Well done and sufficiently spooky :)

I love this...I think we may already have the supplies, and my boys are itching to get into the Halloween mood!

Céline - I think we will be making ghosts next for our dining room window! :)

Planning a BOOthday party over here what a great idea for a spooky banner! thanks.

I love this banner Denise!! I will bookmark and show my creepy skull loving daughter!!
thanks for sharing it with us!

I love this banner! I just might make one.....for next year. hahaha. I wish I could do it now.