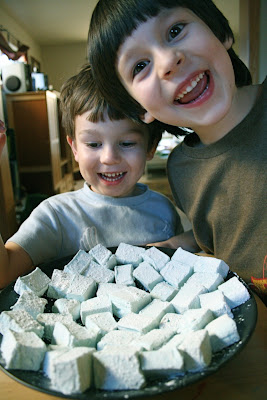 The boys and I made homemade marshmallows yesterday. So what else can you do but start a fire, get out the skewers, and roast some marshmallows and make s'mores! 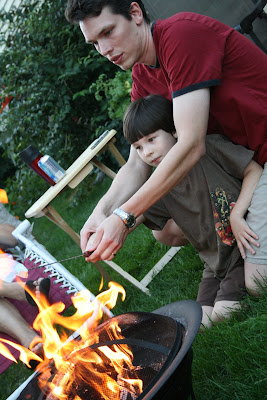 We have family in town this weekend, so they came over last night and we all sat around the fire. The kids played and ran around and when it was time for marshmallows, we invited the kids playing in the alley to come up and join us. Everyone had fun roasting marshmallows and fixing their s'mores. So yummy! The boys were very proud that they had homemade marshmallows, and one four year old told his mom, "There are two recipes we need to get from them. First, the homemade pizza recipe, second this marshmallow recipe." :) 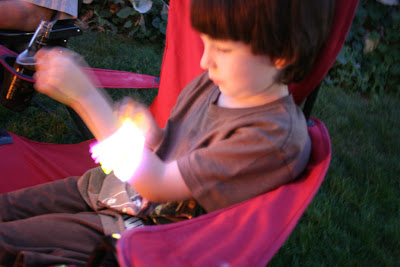 After the kids were stuffed with graham crackers and marshmallows they rode their bikes, played hide and seek, and then put together a bunch of glow bracelets grandma brought as a special treat. 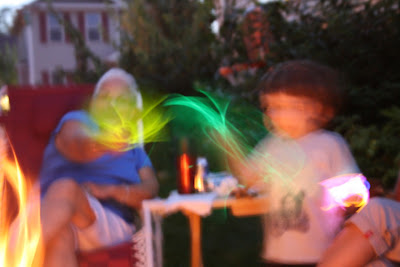 The adults all sat and watched the kids run until the darkness descended and the kids went inside for bedtime. It felt like were were celebrating the ending of summer - and while I know we will have many more hot days, those long summer nights are indeed almost at an end. Lovely evening! 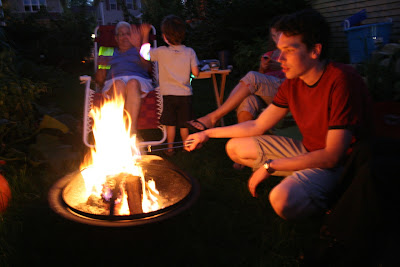 Get the homemade marshmallow recipe here...
Posted by denise at 12:35 PM

Everybody looks comfortable and like they're enjoying themselves so I'm guess that the mosquitoes have abated some?!

It is Labor Day weekend, so it is kind of the last blast of summer!

I am checking out the marshmallow recipe now. I never heard of homemade marshmallows but I bet they don't have corn syrup in them!

The fire looks fun. Although we are no longer under fire warnings, we are still shying away from open flames here.

Looks and sounds like a blast! I've been wanting to try homemade marshmallows for a long time...we will give these a try soon.

Love the happy faces in the first shot!

PS-When I left a comment the other day on your garden post, I falied to see the part about approval...not seeing my commment I left another...but since I write whatever comes to mind, I couldn't remember the whole thing! Between the two I think I got all my points in there! Love checking your blog! Have a great weekend~

Yum... those marshmallows look so great. Autumn and Noah LOVE marshmallows! I should be a good momma and try to make some for them. :)

That really takes the cake.

great summer post...love the homemade marshmallows...good to see family together on a lovely evening.

what a wonderful way to end a day.
and it is so cool that you made your own marshmallows.

Oh, Y.U.M!
I LOVE them homemade! We had TONS of campfire smores this summer and I so wanted to make our own.
Well we have plenty more time for autumn campfires and homemade marshmellows! Thanks for posting the recipe!

Yay! We are just starting to gear up for warmer weather over here so this is very inspiring.
I'm kinda seasonally confused right now though...Xxx

I loved the beautiful photos and reading about your last summer celebration. Those marshmallows look yummy!

How sweet - literally! Looks like a really great way to celebrate the summer. I bet your boys will remember the homemade marshmallows for a long time.