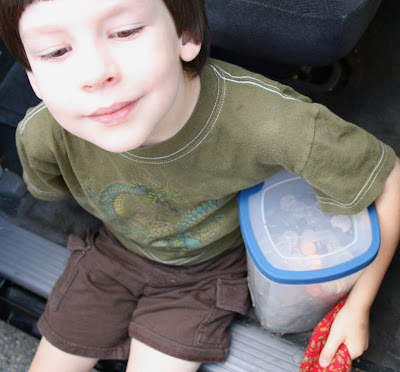 The boys have been interested in money lately. For A, he wants to know how much coins are worth, how many bills the coins equal, how much money it is in relation to things he wants to buy or how much things in our home cost. G is interested in that he wants bubble gum, and is whatever he holds in hand enough for bubble gum? Of course I should mention he has never had bubble gum, but loves the idea of it.

So, both boys have been collecting coins. Digging in my purse, finding coins in the car, and asking to put any coins we get as change into the "money bowl". I have used this big wooden bowl for change for years, and when the boys were old enough to put things in their mouths, it went up high. As they get older, they want the bowl down where they can add to it and see how much is in there. They have been adding to the money bowl for months now. They recently decided that the money bowl was full enough and we needed to go shopping for a few things they were saving for. We discussed how most places wouldn't take 30 pounds of coins and that we needed to go to the bank to trade it for bills! So we poured the coins into a portable container and headed to our local credit union. The boys were disappointed to discover that the coin counter was in a back room and they could not see it. As the woman left with their coins, we heard a familiar voice. One of our neighbors now works at that credit union and was behind the counter and offered to take the boys back to watch! We went to the back room and the boys used a little paddle to push the coins into the opening as it clinked and whirred away, counting.

When it was done it displayed a total and printed a receipt. Wow. They had saved over $300 in change! :) We took our receipt to the counter and our neighbor counted out the bills. The boys each put spending money in little zipper coin pouches that they were carrying, and the rest went into their savings. They were so excited!

I love how every day experiences often turn into the best learning moments - all on their own. Awesome.
Posted by denise at 10:43 PM

I remember the boys' saving change when we lived in Unalakleet...when we were going on vacation they wanted to take their change with us...ha :) I could just see the weighted down backpacks...so we decided to take it down to the local store...but they wouldn't accept it unless we rolled the coins into the exact amount sleeves...ugh...it was quite a lesson for all of us...hee ;)

now the boys' see those coin machines in grocery stores, but they are challenged with saving their change...as they like to use it on gumballs...hmmm.

I completely agree with your thought about everyday experiences becoming great teachable moments. We just started a "giving jar". As the change begins to accumulate the girls are experiencing the same fascination and curiosity related to money.

I love how the "every day" can be extraordinary and memorable. Every time Evie brings in her piggie banks to dump the change they ask if we want to come watch. I try to go to the bank where everyone speaks Spanish so we can practice our Spanish and watch the money! Car washes and the vet are other places where we have had amazingly kind people ask if we want to see how stuff works. I love curiosity.

I wonder if G will like bubble gum? (I can't stand the taste, love the bubbles!)

Wow... that's a lot of money! Wonderful learning experience too!
We have a change jar on the kitchen window ledge but on 16 yr. old is always taking from it. He leaves all the pennies, isn't that nice of him?

I love how you described the way each boy relates to money. The bubblegum thing is so cute. ;) What a great learning opportunity for your boys.

So what are they saving for?

Tiff and Anet - The boys don't yet dig through the coins to buy little things on their own yet...but when they do I'm sure we'll have much less in there! ;)

Mariah - We tried a giving jar last winter but they were too young for the concept, I think...so we focused on donating our time and ourselves, but I think they are old enough to re-visit that now - it is a nice idea!

Jen - I have a feeling he won't really like bubblegum, since he isn't a fan of strong artificial flavors, but it will be fun for him to try it anyway, I'm sure. He talks about it a LOT, but when we are in front of it he doesn't want any...so I think it is the thought of it! ;)

Liz - They have been wanting some playmobile things - they chatted and decided they could get a whole 'set' type of thing if they each got part of it. So one got an airplane and a cargo loader, the other got the airport and some people! :)

Sharon - I know! I was surprised at how much it was when counted!

That is a great real life learning experience. $300 is an awesome amount to save up, good job!

That was really nice of your neighbor. I just love when people are sweet to kids.

What a good experience for them.

My kids love saving up change too. (Though my son would rather spend it.) And how cool that they got to help with the machine! And that the bank doesn't take 10 percent like the ones in the grocery store :)

Jennifer @ Fruit of My Hands said...

Wow, great work guys! I wish I had $300 in loose change laying around!

We save our change as well. We ended up with about $200 which bought us our lobsters and a few other meals out on vacation!