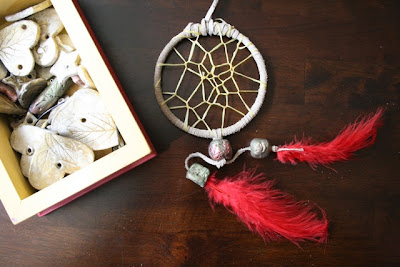 G has had an interest in Native American craft, dance, and folklore of late, and we have been reading some of the trickster fables as well as reading about costume (oh, he loves the beadwork) and craft. One thing that caught his eye is the dreamcatcher. The Ojibwa believed that a dreamcatcher protected sleeping children from nightmares. "Only good dreams are allowed to filter through . . . Bad dreams stay in the net, disappearing with the light of day. Good dreams would pass through and slide down the feathers to the sleeper." 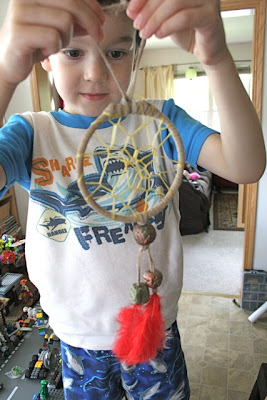 Well. When he heard that he had to make one. He had found a 'kit' for making one, but of course didn't like the plastic beads and garish feathers. He had his own idea. We used a metal ring base, and wrapped it with leather. He then ("I'm doing it all by myself") carefully threaded waxed raffia around and around and around for his web. He used beads from his box of homemade clay beads he created awhile back, and red feathers - his favorite.

As soon as it was done he had to try it out:: 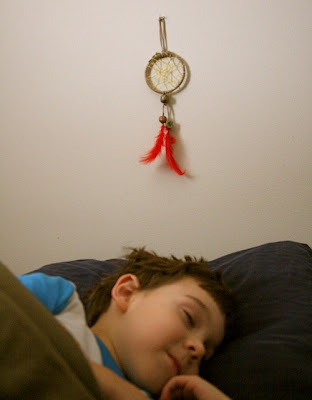 Works perfectly, he says.
Posted by denise at 10:31 AM

Adorable.. I need to make a new one.. I made one when I was 14 had it till last year now it is falling apart. :( Maybe I can repair it.

I Love It.
Made just the way he wants it, it can't help but be perfect :)

We went to a Native American Pow Wow last month. The bead work was way beyond amazing. I had a chance to speak with some of the women who made the artwork. The hours spent on each piece is unreal. The talent blows my mind!

I love the handmade air dry clay beads! And I'm sure a catcher of dreams that he's made himself works perfectly.

Owen has one hanging over his bed as well :)

We saw some work a couple of weeks ago at our folk art museum. thousands and thousands of tiny beads.
amazing.
(amazing that anyone would continue on eternally to create such a masterpiece, to me.)

How sweet. Sophie is five and she has always had a dream catcher in her room. She believes in it whole heartedly, and when she inevitably has a bad dream she will come and tell me that her dream catcher needs to be cleaned.

Beautiful! I have yet to do these, but we certainly have them hanging up in our bedrooms, (we have friends who make gorgeous dream catchers)!
xo maureen

Awwww, we love dreamcatchers and tricksters here, too! One of my girlies especially loves the trickster tales from Australia, which begin differently from our fairy tales. So now, when she makes up her own stories, she starts it with a sort of hybrid, "Once upon a time in the dreamworld..."