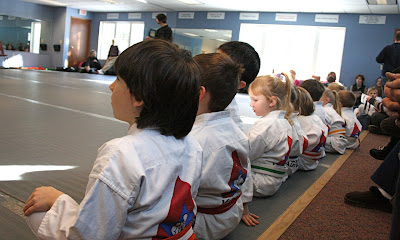 A is an all or nothing kind of boy. All meaning 150% live and breathe it. Nothing meaning it is the worst thing EVER in the world. When he showed an interest in karate I didn't know which way we would go. After almost six months he is still into it, loves it, and is super excited about going to class a few times a week, every week! 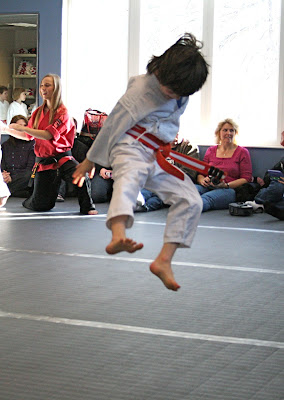 Karate has been awesome for him. A is an intense boy and some things can be 'too much'. So, while he is in a room full of kids for the class, his focus is on the instructor. While the noises can be very loud, they are based on moves, and everyone does the same thing at the right moment. While it is a group class, it is really an individual sport for him. And while it is an exacting sport, his instructor is a happy gentle soul who is great with kids. Transition into class is exactly the same every time - and they get to wear a cool uniform. He really enjoys practicing the specific moves and combinations, and remembers every little detail. He loves it. 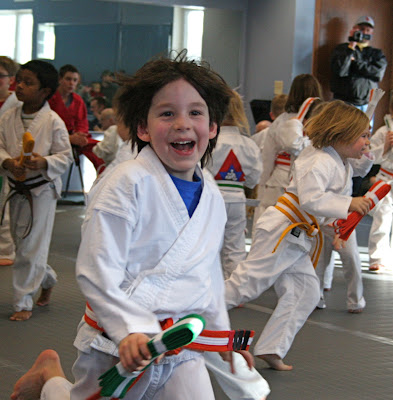 Today was a belt promotion. He was able to do a solo moment to show a combination. He did some great kicks and had a grin from ear to ear the entire time. He about popped from happiness when he got his belt and shook hands with all the black belts there, and chatted about it non-stop all night. 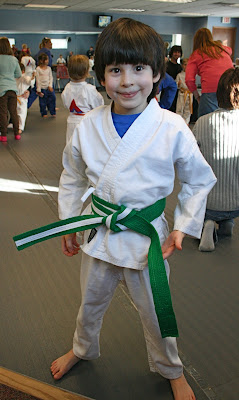 I love seeing how happy he is and how much he LOVES karate. It should be about doing what you love and finding something that is your own. And it is surely his thing. He is proud of himself today, and he should be! He has worked hard for this belt. Good job, sweet boy.
Posted by denise at 9:00 PM

It made me smile to see so much joy in him!!
:)
Congratulations A!!!

Yay for him!!!! Glad he enjoys it so much. Karate is a wonderful sport to be involved in. J likes it quite a bit too.

Hi there,
I found your blog over on Cheerio Road. It's lovely and quite inspiring. My 4 yr old is starting karate this week. I hope his twin brothers survive! Thanks. Look forward to reading more.

It is written all over his face- all the joy it brings him. Congrats A. !!

How exciting! He is so obviously thrilled! :)

Congratulations, buddy! These pictures are great...I can feel his excitement. :)

oh my god, that is the sweetest thing I've ever seen. :) Bravo!

PERFECTION...love those smiles...and you can truly feel his excitement about karate in your photos!

I agree with you...it is about finding something you love and sticking with it...no pushing it!

Fantastic! I've done lots of different martial arts in my life...and I kind of miss it. I wonder if my girlies would be amused or scared to try.

Yay for intensity and passion, and congrats to A.

He's oozing with pride. What a cool kid.

That's super! I love the smile on his face!!!

That's awesome that he found something he loves to do and you are a better woman than I....to drive him out in that weather. Good lord, we stay home in Cali when it rains ;)

That last picture is about the cutest thing EVER! Without ever meeting you or your kids, I feel a real affection for them that comes from the love in your writing and photos. He's so sweet and smart and a great big brother, that Karate Man!

That big smile on his face says it all....he looks happy and proud. Good for A; I'm glad he's found something he loves so much.

Denise, I adore seeing this kind of enthusiasm in a child!!

Please tell your son "Congratulations" on the promotion in his Karate!!! Well Done!!

What a way to sell karate to others! How wonderful!

Awww...congrats to A! He looks like he's having a blast!

Wicked cool D. Love the candles too! Falling behind in my blogreading *mutters*

Those are great pictures. What enthusiasm! I have added you to my blogs I read. :)