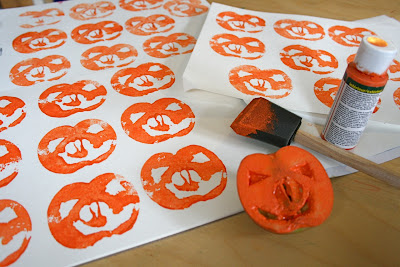 This week we have been working on several fun craft projects. One was making jack'o'lantern stamps using apples as the stamps. We cut an apple in half, and carved out a face - leaving the seed area as the 'nose'. Using orange paint, we stamped onto watercolor paper. 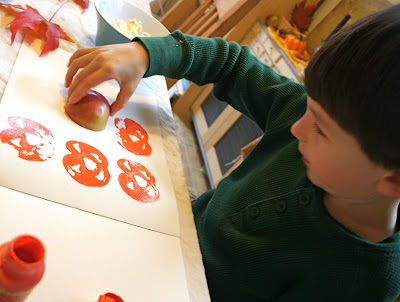 After they dried, the boys painted on the faces into the white spaces, using whatever odd shapes the stamp gave as their guide. 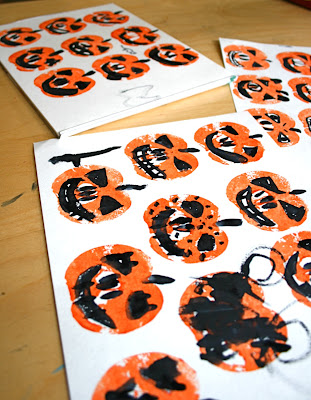 We then cut them out, and the boys used them to decorate our dining room entrance. 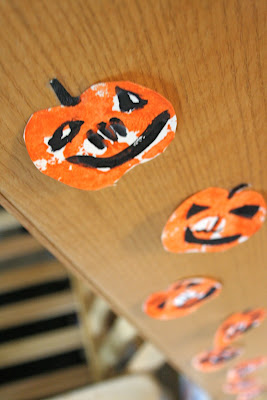 What is cool about this is that there are so many variations you could do. I liked even the plain orange stamps without embellishment - they look great. A and G really enjoyed painting on the faces with the black paints, and thought they might want to do a version with glow in the dark paint as well. You could also use marker instead of paint for the faces. We were going to punch and string ours onto black fuzzy yarn to make a garland - but the boys decided they looked cool all around the arch! They would make nice window decorations or a mobile too. 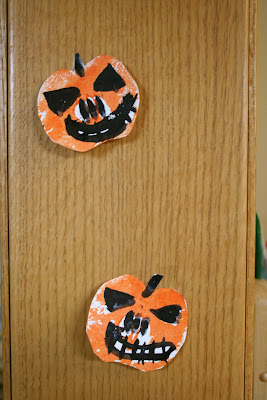 For a few days in there the boys even used them to play 'cards'! Many interesting games were created. Fun!
Posted by denise at 10:39 PM

The jack-o-lanterns came out very nice.

i bet they are beautiful around your house!

I love this idea!! Now we made applesauce in class on friday...next friday we could make apple stamps!!! What will I do when all these fun crafty holidays are over???

These are so fun and cute! Even with the scary faces ;)

Great idea! Thank you for sharing it...

nice activity. they turned out great!

This is a really cute idea, Denise. You need to write a kids craft book, sister... (in your spare time, that is, ahem)

Another great idea from you that my kids will love to try...thank you.

I love this - I will have to try

I love this idea!! I have a 21-month-old. I think I will let him do it, but not put the faces on them because the only coloring he can do is scribble!! lol

Hi! I am Penny. I teach English in Taiwan. I link to your blog from google search engine. I like your blog a lot. Your craft idea is really amazing and fun! Thanks for sharing! I like this apple stamping. I will teach my students to do this craft. Also welcome to my blog (but in Chinese...)
http://www.wretch.cc/blog/peinishen

4I substituted potatoes for the apples and they look great! Thanks for the inspiration :)