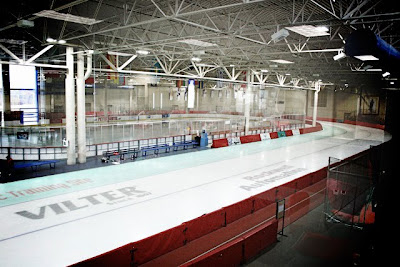 Yesterday we had such a fun day. We visited the Pettit Center in Milwaukee, one of only 11 indoor 400-meter ovals in the world. Yep, ice skating! 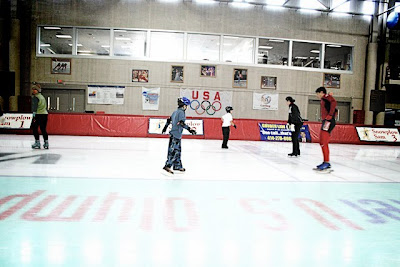 The boys have been looking forward to this for awhile. One of the teens in our homeschool group trains at the Pettit Center, and we have been wanting to check out the oval. After a tour the boys hit the ice...first on one of the skating rinks, and then everyone got to skate on the oval! Very fun. As you can imagine, Wisconsin is a big winter sport state. And speed skating in particular has produced many Olympians - like Eric and Beth Heiden, Chris Witty and many others. Even Bonnie Blair, who was born in IL, moved to Wisconsin after high school to skate and still lives here. Almost half of the 2006 United States Olympic speed skating team were born and raised in Wisconsin. And of the 18 skaters who were on the 2010 U.S.Winter Olympic long track team, 7 of those skaters train at the Pettit Center and call Milwaukee home! 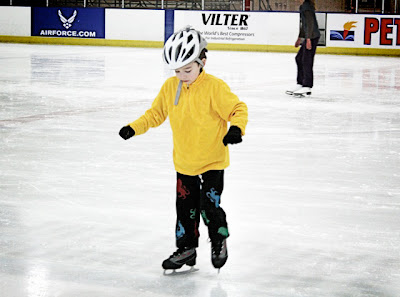 In fact, we watched Brian Hansen, a 2010 Olympic medalist, skate on the track for a bit when we were there. Of course we also watched the local favorite who is in our HS group - a long track skater who has his own hopes for the 2014 Olympics. We always hear about his skating, but this is the first time my boys have seen him on track - and they now plan on being a part of his cheering section at some competitions this winter. :) 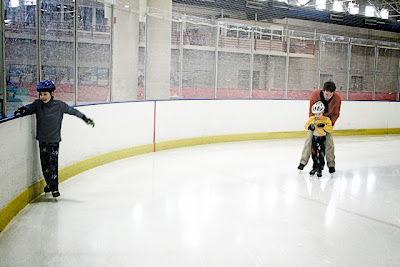 As this was the first ice skating of the year, the boys started out holding onto the walls and sliding across the ice on their booties, but after a bit of practice, they were up and zipping around - and A even was trying to limbo! 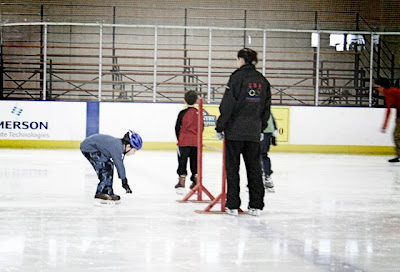 After a great day of skating and visiting with friends at the ice rink, we headed home...exhausted and happy boys. Of course A now wants to know more about things - how do they lay the ice and keep it cold? Why do the long track skates make noise? 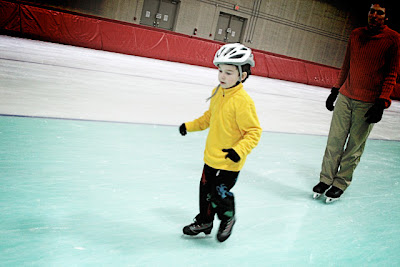 Did you know speed skating has earned the U.S. the most Olympic medals of any winter sport? At least one speedskater from Wisconsin has been on each winter U.S. Olympic Team since 1932. Speed skating is a human's fastest means of travel without mechanical aid or gravity. All very interesting! 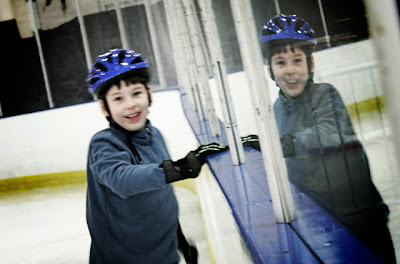 What a great day! We will definitely be skating there again.

That track is really impressive. It is really cool that you got to go on it. Winter sports are in full swing here in VT, but no speed skating that I know of!

So much fun! You can tell he's really enjoying himself in that last one. I'll have to get the girls out to the rink again, they really enjoyed it last time.

I've always traveled past there and wanted to check it out, but never had a chance to. Would love to go and your pics make me want to go even more!

Wow! I love ice-skating, and that track is Amazing! How wonderful to have a rink like that within reach.
Looks like you had a lot of fun :-)

Very interesting! Great photos, too!
have a great weekend
lisa

I loved ice skating as a child. It's a great combination of grace, speed and balance. DId you skate too?

Francesca - I wish! My herniated discs can't do ice skating any more, so I was a spectator. :)

The oval ice track looks like fun- especially for those who want to go really fast!

Our homeschool group was just talking about finding a venue for skating this week.

Wow! It must be so amazing for your kids to know another kid who has serious dreams of becoming an Olympian and is setting high goals for himself. And it always amazes me how unschoolers are so curious about everything. I love all those questions your son was asking after leaving the skating rink. So many schooled people would look at your day as simply a day of fun and just hanging out. It is often so much more than that.

Chris - EXACTLY! :) It is funny - I had commented that none of the kids were really interested in the Zamboni when it was out on the ice...A told me - "Well, that is pretty easy to figure out by looking at it. I'm more interested in the MOLECULES!" ;)

Love that you guys head to Milwaukee so much. We haven't explored that city at all yet. Definitely need to.
Looks like they had a lot of fun!

This just looks like so much fun. My kids love ice skating but the boys have trouble stopping.

My boys would also love a big kid to show them how to do it - (nice) teenage boys are the coolest things to littler boys I think.