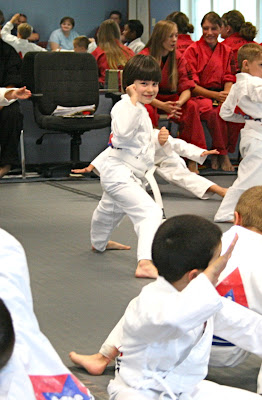 Yesterday was A's first belt promotion in karate. Ohhhhh, he was excited. He has been counting down the days, the hours, the minutes. This is a kid who needs to know exactly what will happen, when it will happen, the order in which it will happen, and be comfortable that he understands every piece before something happens. So, since this was his first belt promotion he was a bit nervous. A is a spunky kid. When we arrived and checked in, all of the other kids were running, jumping, doing somersaults, cartwheels...A sat. Still. For over 15 minutes. Without moving. On the mat. Waiting. 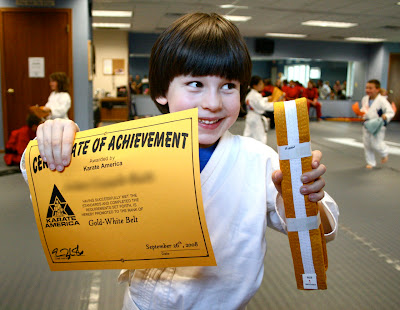 They first did all of the forms together required at this level. A relaxed a lot, but was still very exacting and serious...with the worlds biggest smile, of course. At the end names were called and belts were presented and the kids went down the line of black belts to get handshakes and their certificate. He was so thrilled. And proud. Watching the emotions and excitement and focus and acknowledgement just makes my heart swell. What a sweet boy. 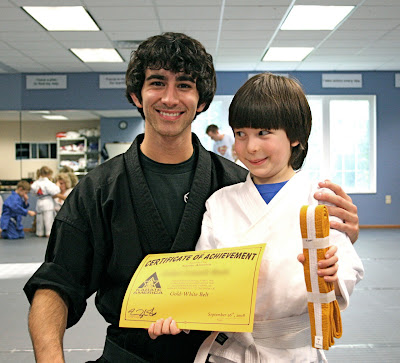 At the end he asked if he could have his photo taken with his karate instructor. I think this photo sums up how he feels about karate and this great teacher of his. Good job, little guy.
Posted by denise at 7:05 AM

i love it. that last photo is so sweet.
congratulations A!!

Yay for A! He looks so pleased, and so cute.

Oh wow! Congratulations! Watching you child do what they love is about the most exhilarating the in the world! Kudoes to A AND you!

He is beaming with pride! Makes me all teary-eyed!

Congratulations A! I'm looking forward to seeing your new moves!

That's fantastic! I love the look on a child's face when he's doing something he really loves. That last picture surely shows it.

That is truly one of the cutest pictures I have ever seen:) What a great job! Congrats, A!

Love his facial expressions! How exciting for him!!